I will explain about History of Oracle Database and Oracle versions in this article.

Those who do not know what is the Database and Relational Database management systems ( RDBMS ) can read the following article.

What is the Database and Relational Database Management System (RDBMS)

Oracle was founded on June 16, 1977 by Larry Ellison, Bob Miner and Ed Oates under the name Software Development Laboratories (SDL). Until 1979, the company did not succeed with this name, and in 1979, three adventurous friends who changed the company name to Relational Software Inc worked in Relational Software Inc. until 1982. The brilliant trio, which has consistently focused on Database management systems and made its first database trial with IBM, failed.

TOP Features according to Version of Oracle database from the first version are as follows.

RMAN (Recovery Manager), which is the backup and recover tool of Oracle database, and Partitioning feature, which makes a great contribution to the Database management system in terms of performance, were introduced with this version.

The most important feature in this version is undoubtedly the Real Application Cluster (RAC) feature. With this feature, Oracle Instance, which is installed on multiple servers at the same time, provides high availability of databases, which we call high availability.

There is still no feature like RAC (active-active) in other RDBMS. The RAC feature has become a sine qua non for corporations, especially for customers with instant money flows such as banking and insurance, which we call business critical systems.

With Oracle 10g, we now have the ability to manage Oracle’s storage management from operating systems, which we now call Automatic Storage management. The Real application Cluster feature, which comes with Oracle 9, has been improved and the Grid Infrastructure feature has also come with 10g.

Flashback feature, which is one of the most important features for database administrators and shortens the recover on user errors, was also introduced with Oracle 10g.

With this version, Exadata, which was designed as a database machine introduced by Oracle on the hardware side, was introduced. Oracle 11g was the first database version used in Exadata.

Active dataguard feature was introduced in this version for the disaster recovery feature of Dataguard databases.

Oracle  has announced many different features with 12c version, it has already echoed in the market and the most important reason for this is that it announces Cloud feature. Now the concept of g (grid) in 10g and 11g has been replaced by c (cloud).

Autonomous Database and Data Guard Multi-Instance Redo Apply are the most important features in this version. Let’s look at what this feature is.

Oracle Autonomous Database is a cloud-based technology introduced in 2017, designed to automate many of the routine DBA tasks required to manage Oracle databases. In particular, Oracle says that database administrators (DBAs) will have the opportunity to do higher and more strategic tasks rather than routine and tedious tasks . Because lots of DBA tasks will be done by Oracle, thus Oracle will be a self-managed database.

I will continue to add new features and new versions in the future as soon as new version of Oracle has released.

Do you want to learn Oracle Database for Beginners, then read the following articles 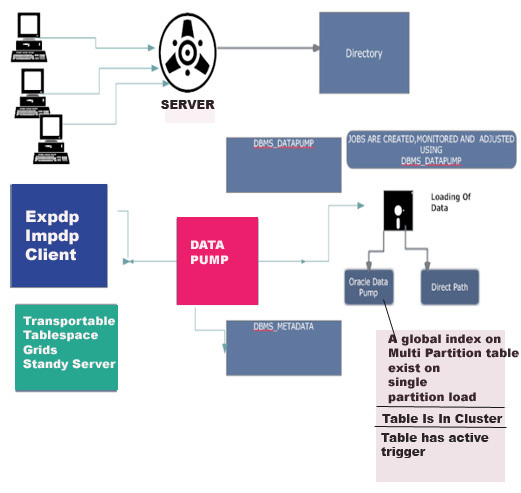 Where and Query Clause in Export ( Expdp ) in Oracle

Hi, I will explain Alter System Flush Buffer Cache in Oracle in this post.  5,343 views …